Bored, but not lonely.

Surely, that’s what Kei felt at the time.

Staring mindlessly at the white ceiling of Class 2-D, Kei was cradled by her chair, waving her feet as she tossed yet another book away from her.

“Mou! What am I supposed to do alone in here!?”

The time struck near 5 PM. Everyone has already left the classroom ages ago, but for some reason, Kei remained seated in her chair as if patiently waiting for something.

Hoping to ease her boredom, Kei turned to the window. The sun slowly crept down as the red hue of its final moments filled Kei’s vision with color. Of course, for a maiden like Kei, this was a sight worth pouring hours into. However, it’s only temporary, and before you know it, night has already struck.

“Eh?! Are you serious? I should really head back. Maybe something came up so he couldn’t show up,” Kei muttered to herself as she fiddled with her phone, her face puffed out and her lips pouted, “Hmph.”

Right as she was about to leave, the sound of the sliding door slamming against the wall breached Kei’s ears, the noise echoed in the empty room.

With slight tears of excitement visible in her eyes, Kei turned to the door, only for a frown to appear on her face afterward.

“Karuizawa-san, what are you still doing here?” a pretty girl with short black hair questioned, her hand still against the edge of the door.

The sight of Suzune was not the one she expected to meet. Not prepared for the situation she’s in, Kei kept her mouth shut.

“I was just in a meeting with Chabashira-sensei. I forgot something here, so I just came to get it before going home. Were you waiting for someone?”

Kei jumped at the sudden question of the dark-haired girl right in front of her. A question she didn’t expect to come and, undoubtedly, one that she wouldn’t hope to hear.

Suzune continued, “”Anyways, I understand that it’s pretty late now, but I’ve been meaning to ask you a few questions. Could you spare a bit of your time?”

“Uhh…Just a few minutes, right? I can stay for a bit longer…”

“Thank you. It’s related to what Chabashira-sensei and I discussed earlier. Despite the fact that we’ve fallen back to Class D once again, we’re at a position where we can utilize the potential of the class, at least, a better position than when we first started.”

“I guess. I’m not really that involved with the class’ affairs ’bout potential and stuff like that. But we’ve managed to fight against the other classes and get good results, right? We’re doing great now that we have you as a leader.”

“I appreciate it. And about that, are you experiencing any difficulties in our situation right now?”

“Er… I’m pretty okay since everyone’s doing well. It’s just that when it comes to stuff where I can’t really ask for help like in the middle of exams, things get a bit rough, y’ know?”

Kei softly scratched the side of her slightly red cheeks, her gaze avoiding Suzune’s.

“Eh? Really? Actually, I had a hard time understanding our Math lesson today. And ugh, the homework that was given earlier. I probably wouldn’t be able to answer it.”

“Then let’s do that. Take a seat,” Suzune offered, extending her hand towards the nearest seat.

Kei sat down, placing a water bottle at the edge of the table.

Time passed by, and Kei and Suzune remained in the classroom, slowly going over the contents of the lesson.

“Ugh… It’s only this part I can’t seem to understand!”

With frustration rushing through her body, Kei aggressively put down her pencil, causing it to roll off the table afterward.

With her attention focused on the pencil alone, Kei overlooked Suzune beside her, who was also reaching for the fallen pencil.

Their hands connected with the pencil in between their fingers.

Their eyes met, and in a bit of panic, Kei tried to stand up but hit her head against the bottom of the table. Following her dizziness, Kei grabbed onto Suzune.

With the force of when Kei hit her head, the table shook, causing the opened water bottle resting on top to fall over Suzune and Kei, drenching their clothes.

Unable to grasp the situation, Kei stared at Suzune’s glistening face as droplets of water slowly climbed down her cheeks.

With Kei’s body over hers, Suzune could only stare.

Kei’s vision was blurry, her thoughts were all over the place, conflicting with each other.

Drowsy, losing sight of the situation, Kei got herself lost in the maze of her own thoughts.

The image of her beloved is reflected in Suzune’s eyes. Hallucinating.

In that precious moment, Kei could no longer tell the difference between her thoughts and reality. Overwhelmed with feelings and emotions, Kei slowly lowered her head, getting closer and closer to Suzune’s glistening face.

Suzune didn’t know what to do. Heck, she didn’t even know what was happening. She waited patiently, ignoring everything else, and laid her eyes upon Kei only.

Blinded by her own heart, Kei laid all of her emotions upon Suzune. Their lips connected.

Suzune’s eyes shrunk to a narrow; the pleasure of the unknown sent chills throughout her body. She panicked, contemplating whether or not she should push Kei away.

Kei was still lost in her maze of thoughts. But, soon enough, her vision started to clear up, and the image of Kiyotaka reflected into Suzune’s eyes slowly faded away, bringing Kei back to reality.

The realization hit, and Kei’s body began to tremble.

Kei began massaging her temples, the overwhelming realization hit her as if the heavens fell from the sky.

Only starting to comprehend the situation, Kei laid her eyes upon Suzune’s wet figure. Her clothes are a mess, and her skin glistened with the droplets of water, reflecting the light of the classroom.

Realizing that Kei had stared for too long, she turned her gaze away from the cute Suzune, her cheeks red and puffed out.

Having her name called out, Kei turned towards Suzune, only to be met by the sight of Suzune’s face at a dangerously close distance.

Before both of them knew it, their lips locked yet again. This time, Suzune initiates the attack.

Her mind and body filled with all sorts of feelings and emotions, Kei couldn’t push Suzune away. Kei’s thoughts slowly went blank.

A gentle moan escaped Kei’s mouth as they broke off.

“…Horikita-san,” Kei whispered softly as she extended her hands to hold Suzune’s face.

At this point, both Kei and Suzune were no longer in control of their own body. The pleasure and emotions rushing through their veins took over.

Kei’s heart began beating faster as she slowly went in for another kiss. On the other side of the pleasure, Suzune wrapped her arms around Kei, their hearts were as close as ever.

Moans kept sliding through their locked lips one after the other. The arrangement of the chairs is a mess, their heir is a mess, clothes, and everything. All that is in order is the continuous flow of pleasure conquering their minds.

The both of them broke off, desperately trying to catch their breaths.

“H-Horikita-san… We’re not done yet…”

With that, Kei gently shoved Suzune down to the floor, pinning herself on top of her.

Suzune’s arms rest on top of her head, exposing her front much more than before.

Her uniform was in a mess. The buttons on her blazer popped out, her necktie was nowhere to be seen, and on top of that, her underwear slowly peaked out of her wet shirt. Gazing upon this beautiful view, Kei’s cheeks were tinted in red.

Kei looked at Suzune’s face, then to her open front, then back to her face; the small droplets of tears that built up in her eyes emphasized her beauty even more. A memory no one could witness and stay in control.

Once again, their lips lock together. Slowly, Kei’s hand crept on Suzune’s body. From her face, to her neck, down to her breasts and waist, and then finally under her skirt.

A luscious moan escaped through Suzune’s mouth, the tone of her voice filled with pleasure and emotion. A voice that’s tickling Kei’s ears to arousal.

The pleasure continues to grow stronger. Their heart rate increases more and more each second.

Their lips still connected, and with no signs of ever breaking off, Kei begged for permission to enter using her tongue. At this rate, Suzune’s mind was on the brink of blanking out. She slightly opened her mouth, letting Kei slide through even deeper.

With this, the pleasure now breaches Suzune’s body from top to bottom.

With Kei’s heart beating faster and faster, her fingers filling up Suzune’s luscious desires picked up its speed.

Suzune yells in pleasure, warning Kei, but all that did was incite her even more.

Kei’s heart, fingers, and tongue, they are all increasing in speed. Suzune’s moans on the other side of the pleasure also rapidly slide through her mouth.

“Yuwuo’re ruweally holdin’ on-pretty long, Huworikita-san. As expected,” Kei mutters as she attacks Suzune’s neck. The receiver of the pleasure must be blanking out by now.

As if she received a signal, Kei’s fingers go even faster.

Not able to handle the amount of pleasure any longer, Suzune’s emotions burst open, her juices gushing out of her for the first time ever.

“Your face is so red, Horiktia-san. You’re so pretty…”

Only Suzune’s stockings and skirt remained intact. Her uniform and underwear were tossed to the other side of the room.

She then slowly got back up, her body covered in her own glistening juices.

Suzune then gently pushes Kei down to the floor, reversing the position. 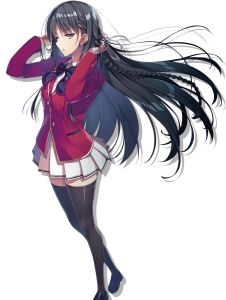